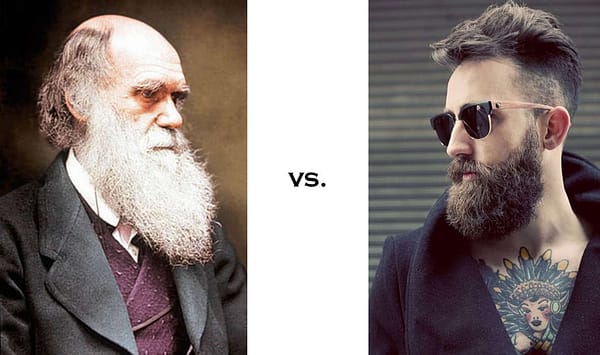 But it’s not beards I’m talking about, even though Darwin would get much respect from some members of the design community.

Darwin is famous for his “Origin of Species” where he raised the idea of “survival of the fittest”.

It’s considered a gold standard, even if it is laborious. How else to get away from subjective judgment and personal bias?

But have you ever considered the shortfalls of A/B testing and how they might be denying you from creating an optimal user experience?

At ForMotiv, we did some brainstorming on this during the design of our behavioral analysis engine.

We came up with four key areas where A/B testing is failing the UX design community.

1. A/B Testing is laborious (aka EXPENSIVE)

So, you have been through hours of meetings with your team and the original concept for your UI (or form) has been thoroughly chewed up.

The version you are about to test probably doesn’t even look like the original concept.

In order to validate the decisions from the many hours of initial discussions, how will you execute the test plan?

Superficially, the process of A/B testing is good – it even looks a lot like Darwin’s “Tree of Life” diagrams:

But if you are constrained by time and budget you will have to radically filter down what you’re testing.

As soon as you start to make subjective choices about what to test, you quickly lose the benefits of a controlled evolutionary process.

2. A/B Tests are a poor tool to measure uncertainty

By definition, A/B tests force a binary choice. One design is better than the other. But A/B testing results are deceptive in their simplicity.

Their clarity is an illusion; bold decisions made based on a binary result may ignore important aspects of human decision making such as:

When you encounter vague situations, you could re-architect your A/B tests to provide some insight, but this adds time and cost.

Looking back at the previous point, do you really have the budget to do this?

And even if you do, will the tests capture the nuances that matter?

There’s a reason that evolution took millions of years.

True tests involve a life cycle for each iteration and take time to execute. And evolutionary tests are broad, not subjectively chosen and narrow.

This is not a great fit in the corporate world.

After all, if you make many changes at each step, how do you know what was successful? This is another reason why evolution is necessarily slow.

The resulting time pressure leads us to grab for each small improvement that we witness.

But what if there are path dependencies?

Following the chain of small improvements only helps us if expected improvements are small and linear, drastically reducing the chances of making bigger improvements when significant insights are stumbled upon.

Taking a look at the scenario above, focusing on the overall outcome would say that testing more things concurrently is good (scenario on the right).

But this is laborious and expensive, so most testing is executed like the narrow path on the left.

Expanding a little might have left us with highly evolved fish.

But the broad natural evolution that life on earth experienced led to all kinds of complicated life forms, including customers.

A related flaw to the last scenario is that A/B testing (and much UI design) assumes a static world.

How many times have you heard that a user interface needs to be completely redesigned?

In many cases, the original design was great, but the environment changed.

In evolutionary terms, these are extinction events. According to the world-famous Natural History Museum in London:

“The vast majority (over 95%) [of species] died out because they couldn’t compete successfully for food or other resources. Or they failed to adapt to changes in their local environment over tens or even hundreds of millions of years.”

If you assume an unchanging world and only perform A/B testing at the beginning of your product’s lifecycle, you are doomed to meet the same fate.

But returning again to point 1, it is prohibitively expensive to continuously test using this methodology.

But what if you could continuously monitor the performance of your user interface? You could keep ahead of the environmental changes – and may even get the bonus of uncovering vital competitive intelligence.

Monitor your users’ experience in a different way with ForMotiv

We won’t make the claim that ForMotiv can solve all of your problems; but for the many companies that have problems creating effective forms, predictive behavioral analytics is a much better solution than A/B testing. Using the four points that we raised, let’s take a look at how ForMotiv can help:

But don’t just take our word for it. Check out this review that we received from Raymond Camden, a well-known Developer Evangelist, a while back to get a great description of what we do and how we do it. Note: Formatic is now ForMotiv, and we’ve come a long way since then… 🙂

Or better yet – ask for a demo. We’d be happy to help you evolve your thinking about how to conduct user interface testing, especially for forms. We’ll also introduce you to some of our more advanced features, but I’ll save that for another blog post!